The following is an adaptation of an article we found on the absolutesnowmobile.com website.  Although originally written about the Adirondack trail system, the issues involved apply to our trail system in Central New York as well.  It is an excellent explanation of the many factors involved in building and maintaining a trail system over a long winter season.  It is used with permission from AbsoluteSnowmobile.com. Please visit them for excellent information on Adirondack snowmobiling. 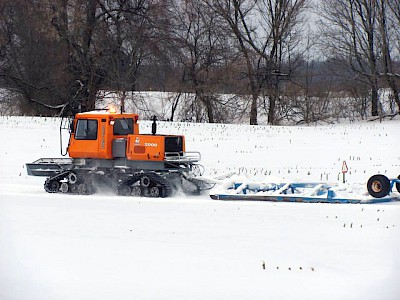 Grooming The Trails... What's The Story?

Has the trail been groomed or not, and why? The eternal question...

The definition of grooming:

Once the snowmobiling season begins, the condition of the NYS snowmobile trail system is on everyone's mind.  When snowmobiling, we all want perfectly groomed trails with a solid base and no drifts, no bumps, no holes and every sign in place. That is this writer's expectation. When our expectations are not met, we tend to get angry and look for someone to blame.

It's a certainty that each one of us has traveled a snowmobile trail that was not groomed or had big moguls, a missing sign or two, and in the worst case scenario all of the above.  Any snowmobiler with reasonable expectations knows that they will encounter trails like this and must be prepared for them and understand why they are the way they are.  When this type of trail is encountered, we must ask themselves why might this trail be the way that it is?

Some questions to ask yourself:

First of all, it must be remembered that the people setting up and maintaining these trails are all volunteers.  Grooming is done by snowmobile clubs or grooming associations.  New York State trail development fund money is available to all trail building clubs who apply and qualify for it.  These funds may be applied to the building of bridges, posting of signs and overall maintenance of the trails.  The rest of the story is that up to 80% of a club's trail maintenance funds are raised privately through fundraising events.  Most clubs have to work tirelessly to meet their trail grooming expenses, and some can't keep up.

New York State is a diverse area with a wide variety of terrain.  In order to maintain the trail sytem through this terrain, proper grooming equipment is needed. There are many types of grooming equipment in use throughout the state, and it is all very expensive. Groomer prices range from $70,000 to $180,000 per machine, and that is just for the  tractor itself.  Drag attachments are also needed to actually level and pack (groom) the snow. These drags can cost upwards of $13,000 by themselves.  The clubs and associations often borrow the money to pay for the equipment.  Often, the equipment is worn out and in need of replacement even before the loan is paid off.  It is figured that there should be at least one piece of grooming equipment for every 50 to 60 miles of trail.  With about 8160 miles of trail in the New York State system, there should be about 149 pieces of grooming equipment state-wide, and we're not even close to that.

Actual grooming does not always start with the first snowfall.  Many trails run on private property where the landowners require a minimum sufficient snow cover before grooming can start.  New York State law stipulates that there must be at least three inches of snow in order to open the trails.  Another factor is that some trails cross over lakes, wetlands or waterways and a minimum of 8” of ice is needed to support the weight of a groomer. Some clubs, because of the variance of ice conditions do not allow their groomers to cross ice for safety reasons. In other places, the ground has rocks and stumps which must have sufficient snow covering them before grooming can start.  The first requirement for a good trail is a good base.   Some clubs do not wish to open their trails until the base is established.  This requires several inches of hard packed snow.  When the base is tore up by snowmobilers who use the trail before it is ready, they delay having good trail conditions that much longer.

It is hard to believe, but there are different kinds of snow, and each type has a different effect on trail conditions. The sugary type of snow does not pack well, so the passage of even five snowmobiles can make a freshly groomed trail appear that it hasn't been touched by a groomer in several days. Spring snows have no body and once they  arrive, the groomers are taken out of service as they will do more damage to the trails than good.

Bumps in the trail can be caused by many things.  A part of a rock, a small stump, a log, uneven ground and those little piles of snow left by a snowmobiler who starts up fast or allows excessive track spin are all bump makers.  Once there is a small pile of snow each snowmobile that travels over the little bump digs in on the other side and gradually the big black hole develops. These are sometimes called moguls or "back breakers".

In farmland areas, some trails cross plowed fields.  With the permission of the landowner, some clubs go out as soon possible after the field is plowed under for the season and pull a drag across the area where the trail runs. This helps to form a uniform base, and reslts in a smoother trail.  This is not always possible on every part of the trail system.

Club groomer operators are usually volunteers who do this in their spare time when they aren't working at their regular jobs.  Groomer operators spend many hours of their own time, often sacrificing their own snowmobile riding opportunities trying to keep our trails in shape.  Even more hours are expended on groomer maintenance and repair, especially during periods of persistent heavy snow.  In some cases, clubs are having difficulty finding volunteers to run the groomers and are hiring operators to run the equipment.

One of the hardest situations that a club trail bosses has to deal with is getting their trails back in shape after a storm.  Some snowmobilers seem to expect that the trails should be open and ready as soon as the snow storm stops. These same snowmobilers become quite upset that the trail isn't groomed and either call the area snowmobile club representative about the poor condition of the trails or send emails to their web site or to the NYSSA.  Some even bad mouth the clubs on various internet message boards.  They seem to forget that like snowplows, groomers are pulled off the trails when visibility is poor for safety reasons.  Further, grooming during a snow storm is a waste of grooming dollars because the trail will quickly fill back in, and drifts appear almost immediately so that you couldn't even tell that the groomer had been through. Many times while grooming is taking place, there is what is called ground drifting of the snow. This can put small drifts across the trail, causing havoc to a trail, especially when it's hard packed snow. The key is to set up the trail and groom before a big storm. When done properly, even a day of rain could be a good thing, firming up a base. Most of the time a bad trail can be attributed to snowmobilers tearing up a trail before it has a chance to set. Most clubs groom at night for safety, and in an effort to get the most for their clubs dollar. If you could only groom once a day, you would do it after midnight. The temperatures and sled traffic are usually at its lowest points. The groomed trails will last much longer if they have the proper time to set up.

Years ago, grooming was done by a regular snowmobile dragging a set of old bedsprings around.   Thankfully, we've come a long way. Talk to anyone that rode the trails many years ago and they will tell you that today's trails are a great improvement. If a trail is on poor shape, it's not because the club just doesn't feel like grooming it.

Unfortunately, mother nature and the lack of funding make trail maintenance an uphill battle.  You can help in a significant way by joining a club. In fact, you should consider joining or at least donating to any club whose trails you ride on regularly.   Participation is always encouraged, but most clubs realize that many of its members live a good distance from the area and many have newsletters and websites to keep you informed about trail conditions and club happenings. Take a chance with the many raffles the clubs host.  You could win a variety of prizes, ranging from hunting equipment to your choice of a brand new ATV or snowmobile.  PLEASE REMEMBER... YOU CAN MAKE A DIFFERENCE!!!

An added comment from "Magnum"
Every year I hear people comparing the Adirondack area with Canada and how great the trails are up there. The bottom line is there are many more sleds riding the area trails. Don't come to the area on a Saturday afternoon and complain that the trails are worn. With that many sleds on the trails, it's not safe or practical to run the groomers. Remember the trails need to set after the groomer goes by. A dozen sleds riding on a freshly groomed trail will make it look as tough the groomer had never been there.

Your riding habits need to change! Try coming to the area during the week when traffic is a fraction of what it is on the weekend. Get an area map and take a long ride, getting away from high traffic areas. These trails tend to be in great shape because they don't get the daily pounding of sleds. People tend to ride the same trails over and over because they're not familiare with the area, even though they've been riding the area for years. Anyway... By the time you loop back, more than likely the groomers have been through and the trails are clear because the people that stayed locally are home resting their backs. I tell people to get to the area Friday and ride all night. The clubs work hard (volunteer) to prepare the trails for Saturday traffic and the trails are usually at its best. Sleep in late on Saturday, then go out to a local restaurant for a bite to eat. Talk to the people coming in. Within a short amount of time you'll have a detailed report of the area. Then ride... ride... ride... Sundays tend to be a good day to ride as well. Most clubs are out working hard through the night to put the trails back together after a busy Saturday and most people leave early to get a jump on traffic. What ever you do... Join at least one club and don't forget the donation jars found all along the trails. Be safe and have a great season.

This article adapted and used by permission from AbsoluteSnowmobile.com